Almost since the day a computer was born, cybercriminals were threats. With the arrival of smart devices and of course, the internet, the concern for cybersecurity is growing even more rapidly. According to a study released by RiskBased Security, data breaches exposed 7.9 billion pieces of information just in the first nine months of 2019. This is more than double (112%) the number of documents exposed in the same time frame the previous year. While there have been a lot of attempts to solve this issue by using more advanced technologies over the years, cybercriminals have also measured well up against them by constantly upgrading themselves. There is one relatively new technology, however, that shows immense promise to cut this problem at its root. That technology is blockchain. In this article, we will find out how blockchain can perform this seemingly implausible task.

Cybersecurity is the practice of protecting computers, servers, mobiles, IOT devices, electronic systems, networks, and data from disruptive attacks. There are various types of cyber threats out there – some attack the network, some sneak into your devices through software or apps and steal your data – often surreptitiously, without your knowledge. In some cases, your personal identification information, as well as bank account or credit card information, are stolen and then sold or exchanged on the dark web for others. These buyers then, in turn, may extort your money or bring down your business by leaking sensitive business information or using your personal information against you in other ways.

Some other times, ransomware takes over your device, server, or network and blocks you from accessing your own data until you pay a fee or ransom to the hacker. Yet others may steal your login information, use your computer to send spam, or even crash your computer system.

You may be vulnerable to cybercrimes regardless of you being an individual or a conglomeration. So it is very important to have in-depth knowledge about what is cybersecurity, all the ways how you may be attacked, as well as learn how to keep yourself protected.

What is blockchain technology?

How does blockchain work?

Below are the characteristics of blockchain technology:

Furthermore, blockchain only supports the “create” and “read” features, which ensures that if data in one block changes, data in all subsequent blocks changes as well, causing the entire network to be notified. This feature effectively makes the data unchangeable, making it highly secure.

How can blockchain technology boost your cybersecurity?

The incredible qualities of blockchain technology add a layer of strong protection to every infrastructure based on it, which can be extremely useful in terms of cybersecurity. Let’s see how:

What is a DDoS attack?

Distributed Denial of Service (DDoS) attack is one of the most common, yet one of the most dangerous attacks on a website that a hacker does. Every server, network, or website has a limit of traffic that it can process at each point in time. A hacker sends a huge number of junk requests to the network resource until it cannot keep up with the requests any more and crashes, and therefore, stops functioning.

This attack is not a threat to the data stored. However, it is conducted to hinder a competitor, make money, direct people towards a website of a hacker’s choice (usually a scam one),  and sometimes even as a distraction for a much bigger and harmful attack.

How can blockchain help?

In the current centralised/partly centralised Domain Name System (DNS), the cybercriminals break into the link between the website name and the IP address and then destroys the whole arrangement from within. In a blockchain-powered system –

A hacker can only gain access to a blockchain network by destroying all of the network’s computers, which can run in millions – and so an incredibly difficult and almost impossible job for the hacker. It goes without saying that the larger the network, the more secure the data will be.

In today’s time, the most valuable currency in the world is data. As a matter of fact, a 2018 Statista study surveying a range of organisations found that more than half of them use data to develop organisational strategies.

If your data is stolen, you risk losing everything. Yet, in a centralised system, all data is stored in the same place and hence, it becomes really easy for cybercriminals to steal it – they just have to break open one lock and the data is theirs.

This is where blockchain comes in.

Another big problem in the cyber world right now is identity theft. This means an imposter steals your information, poses as you, and steals your assets – majorly, money.

As you learn from the above points, performing this is extremely unfeasible in a blockchain. When your information is stored in a blockchain, every transaction of yours is authenticated by millions of computers in the chain before going through, along with being publicly available to the entire network. If any of those blocks is tampered with, the whole network knows. Also, a block of data can only be accessed by the original owner of the data – there is no other person involved in the process who has your information, like today’s bank systems. Unless you specifically hand over your encryption key to someone and give him/her access to your assets, no one can touch them.

After the internet came into the world, it became much easier for cyber thugs to send unauthorised links and steal information through them. As a matter of fact, many ransomware and malware are disguising themselves as legal apps and getting into your system to break it down.

The use of blockchain can resolve this issue. Per each software, blockchain assigns unique hashes for uploads and downloads. A user can compare this unique hash with that of the original software developer’s before downloading the update, and therefore, can avoid ransom attacks.

A very common practice among hackers has always been to infiltrate the edge devices like your routers and switches in order to get into your main system. With the rise of IoT devices (devices that speak to each other using the internet), your doorbells, smart locks, and even your security cameras can be at risk of being hacked.

Blockchain is one of the only technologies available right now that can come to the rescue for this threat.

For example, health IoT devices of independent medical centres exchange data about various threats impacting the same ecosystem. Within the framework of the same project, different entities read from the same database, giving them all a common view of the data. When you use blockchain to file this data, each IoT device will read only the data that is relevant to it, and will not have access to others’ data, yet will be able to functionally communicate with every other IoT device in the ecosystem; giving hackers a very hard time.

As more people join the internet every day, more data is produced, which means more people become vulnerable to a hacker’s attack. As we saw in this article, blockchain is a remarkably versatile technology that improves the internet in many different ways, including saving your information from cyber threats. Hope the knowledge you gained here was useful to you and your cybersecurity problems can be resolved using this phenomenal technology. 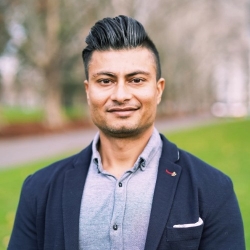 Ralph Kalsi
Ralph Kalsi is an entrepreneur, blockchain consultant and blockchain enthusiast who collaborates with businesses in Australia. With his vast knowledge and industry experience in blockchain, he helps to drive sustainable business growth. He is the CEO and proud founder of Blockchain Australia.